“Once more the Sith shall rule the galaxy! And… we shall have peace.“

I will never forget what my brother said when I showed him the Star Wars Prequels.

“PEACE?!” he asked, incredulous. “I thought that’s only what good guys want!”

It would be years later when I’d realize just how perfectly that remark struck the core of those movies. Who are the “good guys”? It would seem that though good and evil may exist, they are defined in the Prequels without certainty. However mechanically broken and debilitated they present as pictures, this quality of intelligence alone puts them parsecs and lightyears above every single Disney cinematic abomination we have seen since 2015.

Four years ago, I wrote a piece for fun about the ways Rogue One: A Star Wars Story blatantly contradicts the text and story of the original Star Wars movie. Now I return to discuss the nature of ambiguity. I have said before that the Prequels are the most interesting bad films of all time. I stand by that statement, and I continue to love and appreciate them all the more as time passes. And if the popularity of The Mandalorian, Rebels, and The Clone Wars series is any indication, I am not alone.

One of the reasons it was so easy to get invested in the story of the original Star Wars is that the good guys and bad guys are easily and immediately identified, as is the central conflict. The opening text crawl describes a “period of civil war” featuring the “evil galactic empire” with its planet-killing space station and “sinister agents” chasing a princess who’s trying to help the rebels “restore freedom to the galaxy.”

And if that isn’t enough, the first thing you see is a tiny helpless ship getting overrun and swallowed by a terrible colossus. After a massacre is performed by faceless white jack boots, a tall, imposing black-clad gestapo agent tortures and kills a defenseless man. This conflict is literally black and white.

As the original trilogy goes on, the good guys get better and the bad guys only get more evil and detestable until the end. But in the Prequels something different happens. It is never truly established who the good guys actually are, if there were any to begin with. 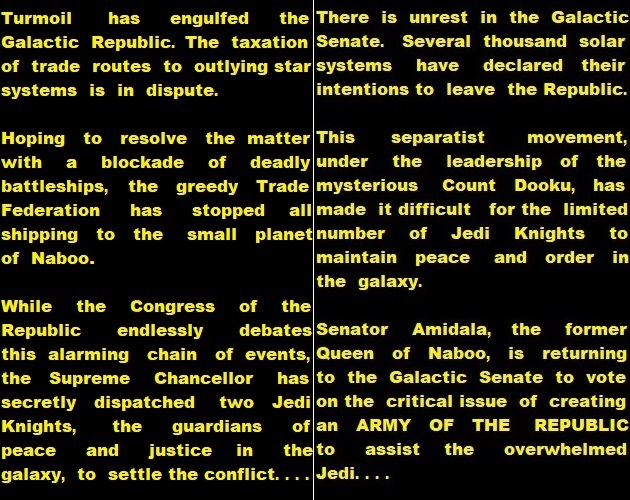 In The Phantom Menace, “turmoil has engulfed” the Republic because of a dispute over the taxation of trade routes. Since there are no Americans in this galaxy far, far away, this is hardly a cause for war. The Trade Federation is described as “greedy,” which is a human flaw but not necessarily a basis for outright evil. Otherwise the most that can be said for the setup is that this is “an alarming chain of events.”

In Attack of the Clones (note in the title which side is apparently “attacking”), things are not much clearer. Now there is “unrest” in the Senate because of a separatist “movement” led by “the mysterious Count Dooku.”

Between Menace and Clones, there is one other notable change. In Menace, the Jedi are described the way Obi-Wan Kenobi originally described them – as “guardians of peace and justice.” But in “Clones,” the Jedi are still maintaining “peace,” but also “order.” Now order isn’t necessarily a bad thing. But the change is noteworthy because one of the ideas suggested by that film is that the Jedi are not what they should be. Mace Windu confidently states to Palpatine at the beginning that Jedi are peace mediators, not soldiers. Yet not only have they been blind to the clone creation, they are all too eager to jump into the fight on their side. When the Battle of Geonosis begins, the Jedi do not simply evacuate the arena. They immediately turn into battle commanders, charging with the clones on the front lines and ordering where to aim their guns. Count Dooku lies to Obi-Wan by telling him the unvarnished truth that the Galactic Senate is now under the control of the Dark Lord of the Sith whose name is Darth Sidious. Despite the Jedi Counsel knowing that they have a blind spot, they dismiss this as deceit from the dark side. So off they march to a war for order and galactic unity with the grand army whose origin they don’t further question, even though the clone genetics came from a bounty hunter they know to be an agent for the Sith who was trying to kill one of the only Senators who did not wish to create a grand army. 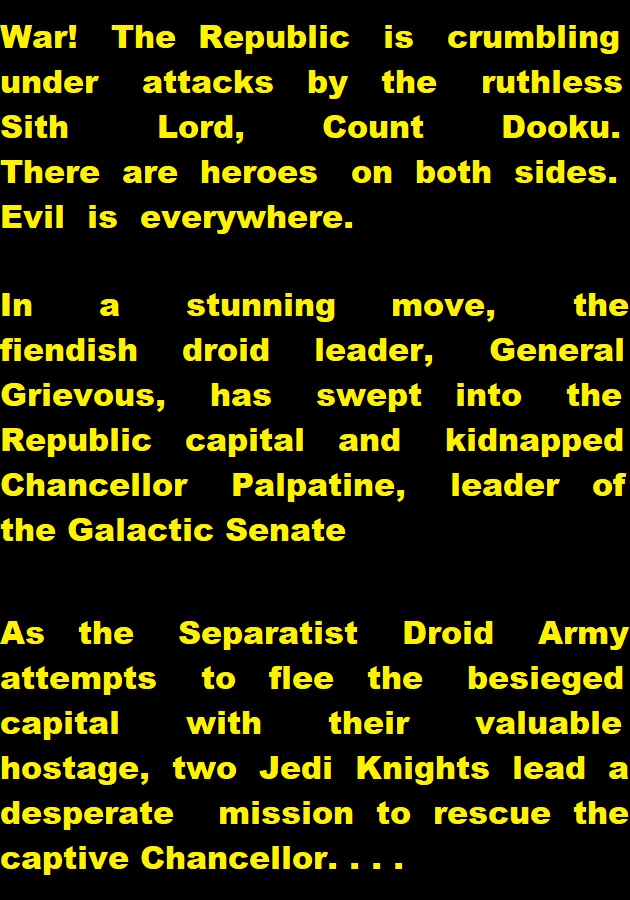 If there wasn’t already enough ambiguity from the first two, Revenge of the Sith makes the uncertainty even more obvious. Count Dooku may be a “ruthless” Sith Lord, but apparently “[t]here are heroes on both sides. Evil is everywhere.”

Padmé is the only one who questions the necessity of the war, despite the fact that she is a veteran of it. She is the only one who remains skeptical of the Republic’s moral superiority. And she is the first to recognize that the destruction of liberty came with thunderous applause from a corrupted and twisted democratic body.

Before I get too gushy, the Prequels do frustrate as much as they fascinate. Just after his return from capture, Chancellor Palpatine is given even more executive power by the Senate. It would have helped the movie if some of those powers were explained. For example, maybe he could now exercise direct authority in deploying and maneuvering troops and fleets, much like presidents can, thus paving the way for the Order 66 betrayal. Maybe he was given the power to reorder and reorganize the entire war effort and home fronts – also a common trait among imperial presidents.

While it is obvious that there is evil among the Separatists, it is not clear that the Republic is the force of good that everyone seems to assume it to be. As it is consumed and burdened more and more by the war, its values are no longer clear. But if you raise the issue, especially to an idealistic kid like Anakin, “you’re sounding like a separatist!”

Reckless abandon in the name of some vague idea of security; what is true of politics is also true of their love. When Anakin embraces the dark side, he does so not for ambition, adventure, greed, or power, but to save a life. So sure that his wife’s death in childbirth is coming, Anakin is quick to deal with the devil to stop it, never once pausing to consider that such a prophecy could be self fulfilled. By adopting such a path, an evil man is born from the darkest recesses within him, just as the Empire did from a Republic that had cast off all of its institutional checks and diplomatic values one by one until there was nothing left of it but what a Caesar figure could fashion for himself. From Padmé’s point of view, the exact same thing happened to both. 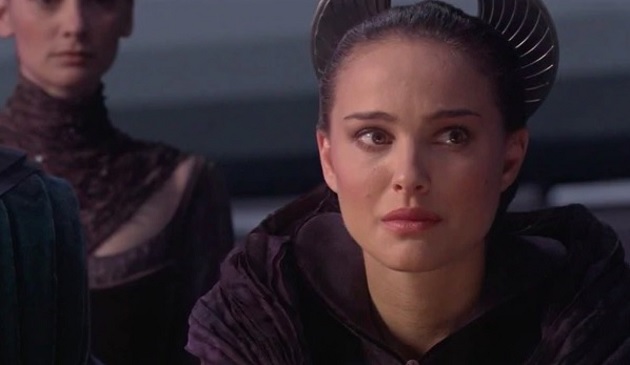 Note, however, that as evil as Palpatine is, the Jedi are every bit as much to blame for Anakin’s downfall. There had always been friction between him and the Council since the moment he first arrived and was told that he would not be trained. By appointing Anakin as his personal representative on the Council, Palpatine sets him on a path to be spurned and betrayed by the rest of them. When he sows doubt into Anakin’s mind that the Jedi have all the answers, he does so in a way that cuts straight to the central tenets of a Jedi’s existence. You can hear it in Hayden Christensen’s voice when his character recites the dogmatic lessons. “The Jedi are selfless. They only care about others.” “[The Sith] think inwards, only about themselves.” Yet this is coming just after Anakin has heard the worst possible advice a Jedi could have given him, even if the principle underlying it was true. Fear of loss is indeed a path to the dark side. That does not make the prescription any less cold blooded. “Do not mourn or miss the dead. Train yourself to let go of those you fear to lose.” It’s hard to imagine anything more selfish, since Jedi are also taught to love unconditionally and exhibit compassion. Thus the venerated Darth Plagueis the Wise meme, which for all we know could’ve just been something Palpatine made up, is a story designed to confront the contradiction. A Dark Lord of the Sith who cares for others and saves lives is either beyond the imagination of the Jedi or a threat to their teachings. Anakin suspects the latter. And as the Jedi close him off and shut him out more and more from their affairs (just as Padmé tells Anakin not to do to their marriage), that distrust only deepens, especially as they assign Anakin more and more unethical and unscrupulous tasks all the while.

We see the entire story of the Star Wars Prequels from the point of view of the Jedi and the Republic as they make mistake after mistake, compromise after compromise, that results in their downfall, all while being too stuck in their ways to retain their foresight. It’s not that love actually leads to the dark side. It’s just that the Jedi always act and speak as if it does. Ironic that Obi-Wan says “only a Sith deals in absolutes” – itself a statement of absolutes that ignores how the Jedi do it too. Does that make them evil? Surely not. But it raises a phantom of doubt as to whether they were truly good.

So who were the good guys? They were the ones who weren’t trying to fight the Clone Wars. The ones who were lost to history after the galactic catastrophe brought upon by the evildoers who promised peace and the clueless dolts who forgot their principles. So explains my dear brother’s confusion.

The good guys in the Star Wars Prequels were the ones we didn’t see.