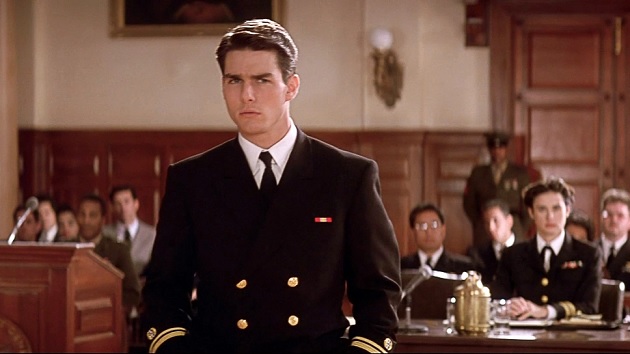 In A Few Good Men, adversarial parties to a court martial prove themselves capable of confronting part of the truth, but never all of it.

My childhood owes a lot to this film. No, I’m not one of those kids who watched it in the ’90s and then decided from that moment onward that my dream was to be a lawyer. But A Few Good Men joins Top Gun as the respective mother and father of the television show JAG, which I watched with my father.

But if I’m being honest, I’m not sure A Few Good Men is a great film as opposed to just a good one. As a lawyer, there’s plenty to pick apart. When Lieutenant Kaffee (Tom Cruise) asked Colonel Jessup (Jack Nicholson) if there was any chance that the platoon ignored the order Lieutenant Kendrick (Kiefer Sutherland) gave them about not harming Private Santiago, Captain Ross (Kevin Bacon) should’ve objected on the grounds of speculation. Never start your opening statement while sitting down. And it was also never clear at any point that the prosecution could even credibly establish that the defendants soaked the rag in poison, as Ross promised to show. And I’m sure if I was a JAG lawyer there’d be even more issues.

But even without the legalistic nitpicking, I always felt let down by the fact that Jessup just comes out with the lie that Santiago was to be transferred. This even though we had already seen a dramatic five-minute character introduction for Jessup that established him as someone determined to the opposite. How is this not a basic pacing flaw that undercuts Markinson revealing that to Kaffee later? The more I thought about it, the more I realized that this issue raised two important questions:

If I’m to delete one of those bits from the film, which do I delete?

The only logical answer would be to just delete the flashback. If you’re going to take something out, don’t gut the awe. Too much of the misdirection in the final act hinges on that specific plot point. So the follow-up question is: what does the movie look like without that flashback intro scene?

Two friends of profound political studiousness, one liberal and one conservative, have told me that that speech, despite the anti-Semitic invective, is one of the greatest defenses of conservatism they’ve ever heard. One touted it as such for its basis on modern realism. The other used it to illustrate how Leo Strauss interpreted Plato’s The Republic as a partial argument for the necessity of institutions and even myths.

The myth, of course, is not just a tall tale or dismissable story unlikely to be factual. It is usually instead something with a more specific social function. They’re sometimes also called “noble lies.” And make no mistake – this is exactly what Jessup is asking us to do here. Don’t question MY judgment calls. Just thank me for doing what you know has to be done and have your parties.

Ironically, what frustrates Jessup the most is that he has to spend so much energy and resources to lie about that noble lie. It’s the flashback scene where it is made clear just how deeply Jessup is committed to that noble lie. “We’re in the business of saving lives,” he says over and over again. And he’s got a point. Aaron Sorkin likely did not in 1989 write this play with 2008 candidate Barack Obama’s ideological opposition to Guantanamo Bay in mind. At the time, it was a vital stronghold in the waning Cold War. That base, and Jessup’s command of it very likely keeps enemies of the West (commies) at bay. It is not easy to just forget all of that because his code red order got a vulnerable trainee killed.

But wait. There’s just one problem. If “honor,” “code,” and “loyalty” are together the backbone of this life Jessup and his men with guns have chosen, how strong is their duty to follow it?

What A Few Good Men appears to be hinting at here is that as long as there will be Santiagos – below-average unfit members of units that cannot afford to be anything less than steadfast and exemplary – there will always exist the imperative to deal with them. However, the men responsible for doing so cannot run or hide from that unspoken duty. The real outrage of the film is not that a hazing ritual resulted in the victim’s unintentional death (though that is, of course, tragic for all involved). It’s that Colonel Jessup made scapegoats out of the two grunts that he himself put up to the task. Where’s the honor, code, or loyalty in that? Jessup can’t handle that truth.

What I love about this theme is that it’s not actually fleshed out through the characterization of Jessup. It’s dramatized through the character arc of Kaffee as the Marine Corps code and men who follow it continue to make him uncomfortable. Going from typical Sorkin-style expeditious bureaucrat to intense courtroom warrior is an arc you’ve obviously seen elsewhere. Here it comes from conflicts first with his partner Jo Galloway (Demi Moore), then his client Harold Dawson, and then from Jessup. Each one increasing in its intensity, with multiple epic Tom Cruise meltdowns until he “wins.” But the victory is more developmental for his character than it is just a win because of what was missing.

This whole time, Kaffee was understandably focused on the details of the trial and the merits of “following orders” that he forgot about the homicide that actually went down. His clients still did something terrible and disgraced their unit, Corps, God, and country. They didn’t intend to, of course, but this is where I see the comparison of code reds to be useful. At trial, two other examples of code reds are described. Corporal Barnes got one in the form of being punched repeatedly in the arm and then getting glue poured on his hands. Pretty harmless, as even he thought it was fine. The other and more debatable one was that Private Bell was placed on barracks restriction with only water and artificial food substitutes because of his liquor theft. Less harmless, but we have no indication that Bell suffered much from this. Certainly not the way Santiago suffered when Dawson and Downey stuffed a rag down his throat, duct taped his mouth shut, and tied him down. Only Sam Weinberg (Kevin Pollak) points out the basic problem early on – that “they’re just following orders” doesn’t erase what results from it. But Galloway and Kaffee are too focused on defending them to hear it. They couldn’t handle that truth either. 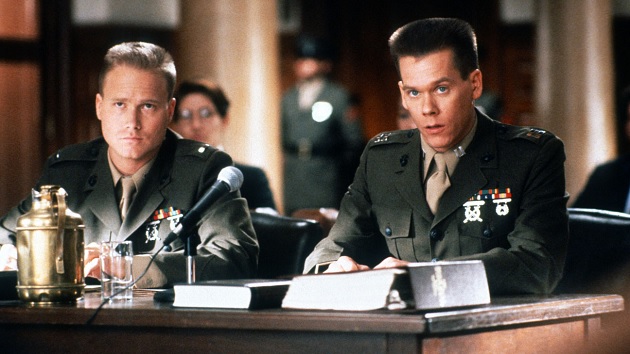 In fact, the only person in the film who truly understands the truth – the full scope and ugliness of it – is the man who dons the uniform, writes a gracious letter, and then puts a bullet in his mouth.

The most common criticism of A Few Good Men is that its procedure is extremely predictable even to the point out outlining the entire plan. And sure, it definitely does too much. The flashback sequence is proof of that. But the reason I keep coming back to it, and the speech, is because they help outline the contrasting philosophies at play both in and out of the courtroom. Though the film ends with Kaffee and Dawson saluting each other with a newfound respect, the full picture is a lot darker than one remembers the first time. Jessup was wrong but he was also right. Kaffee found courage and resolve not just through uniform, but through the Marine Corps and its code. It may consist of rigid, insular personalities like Dawson, Kendrick, and even Jessup, but the men who stand the post and follow the code are by and large good men (and women). On this Veterans Day in the Year of our Lord 2018, I recommend A Few Good Men for a re-watch.

Happy Veterans Day. Thank you to all readers and movie buffs who serve. Never Forget.