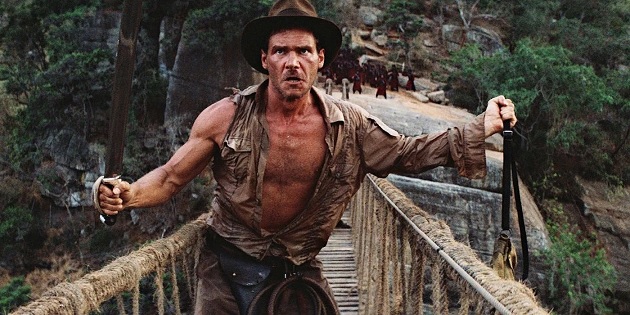 This article was originally published on the Cinematic Katzenjammer in May 2019 for the 35th Anniversary of this film’s original release.

Indiana Jones and the Temple of Doom is a masterpiece. It is a glorious fun-house roller coaster made by disturbed geniuses in perfect harmony with each other. Their goal – anything goes.

That opening song in The Temple of Doom was chosen for a reason. It’s as clear a sign as any of what you’re in for with that film. Everything about it defies the intelligibility of a standard plot. There is no attempt at authenticity, no attempt to ground anyone or anything in any modicum of reality, and no slowing down the ride, whether you’re riding in a car, a plane, a raft, a cage, a mine cart, or a bridge.

It is a precise inverse of the opening scene in Raiders of the Lost Ark, where we met a grimy, gingerly Indiana Jones who barely makes it out of a tomb alive with an idol, only to have it stolen by a fancy-pants rival, and then having to begrudgingly share an airplane voyage with a snake between his feet. Here in Temple, it is Indy who first appears as the fancy-pants, smooth-talking nightclub master, wearing Humphrey Bogart’s white tuxedo in Casablanca, and escapes the chaos with the hot stage girl, the super kid, the antidote, and barely a scratch on him otherwise.

But it isn’t just the opening of Temple that inverts Raiders. The entire movie is a genre exercise in visceral prodding. It’s a heart-wrenching (literally) spiritual successor to Gunga Din. It’s an utterly mad stunt comedy recalling the genius of Buster Keaton. And it’s a musical dance number where Indy and the Thuggee Overseer (and Short Round and the Maharajah) are playing Fred Astaire and Ginger Rogers synchronized to an instrumental version of “Anything Goes.” And it’s a spook-house screamer party with bats, maggots, snakes, slugs, eyeballs, monkey brains, lava pits, and even humans who breathe like ghosts. Temple is all of these things seamlessly mixed together into one bizarre affecting picture that shares a closer cinematic kinship to Sam Raimi’s Evil Dead II than it does with Raiders.

And yet, it’s somehow also an Indiana Jones movie, and not just because it stars the character and was made by the same guys. They each revive different things from 1930s cinema. Raiders came from Zorro adventure serials and features like The Treasure of Sierra Madre. Temple came from musicals, slapstick comedies, and Kipling adventures. Raiders takes place almost entirely outside. Temple is set mostly inside. Temple is a sequel to Raiders, yet also a prequel with no narrative connection to it whatsoever.

Is it my favorite Indy? Of course not. But seeing Temple like this makes everything about it click from the future Mrs. Spielberg’s relentlessly hateful, stereotypical shrieking to the Khali death cult stuff that everyone wants to believe was racist. The kind of Musashi-like bedtime story with which Sallah or Marcus would lovingly tickle their grandkids to delightful giggles. And you’re the giggling grandkids.

If I haven’t already reached the end of this limb, let me scootch one inch further by daring to declare that without these dark inane mad-house antics in The Temple of Doom, the back-to-basics open-air father/son dynamics in Indiana Jones and The Last Crusade might not have been as compelling as it was to so many people. The mythological contrast is what makes the difference. And it’s also how Temple succeeds while The Kingdom of the Crystal Skull fails despite both movies defying physics with everything but flying carpets. Launching a Knievel-style ballistic rocket of an adventure movie fueled by a mixture of George Lucas’s satanic depravity with Steven Spielberg’s giddy cinematic pranking doesn’t work when it’s just Last Crusade 2.0. No one is going to take a dad/kid relationship seriously after one of them exits a nuked and tumbled projectile fridge with his organs intact.

Unless, of course, if it’s a movie where anything goes.