Two years ago, I saw Ready Player One. My feelings for that film went beyond professional appreciation. It touched a nerve the way no movie had in probably at least a decade before it.

What I liked most about it was how true it felt to the experience of having a deep personal connection with the stories, worlds, characters, and adventures that came with playing video games throughout my life. It both critiqued and celebrated that experience with a level of warmth and maturity that I have never seen anywhere else. For all its flaws, there was a love there that could not be faked.

I can’t help but think about that as I try to parse out my disappointment with Pixar’s latest film Onward.

Onward begins with the premise of magic being part of the world but abandoned to the margins in a modern era of technology and convenience. On the sixteenth birthday of Ian Lightfoot (Tom Holland), a shy and easily embarrassed Bilbo Baggins type, he and his older brother Barley (Chris Pratt) is presented with a posthumous gift from his late father that he never knew. With the ingredients and the right amount of magic, they will be able to resurrect their father for one more day.

When things go horribly wrong at first attempt, Ian and Barley have to go on a quest to find a gem that will allow them to complete the resurrection, which they must do before sundown the next day.

“Luckily,” so to speak, Barley has spent his entire life preparing for this kind of adventure. Although he himself cannot practice magic, he has done nothing with his life but consume lore and recklessly use his Scooby van to study up on the old ways of it. Ian, meanwhile, turns out to be the only one who actually can practice magic in any capacity, despite his fears and discomfort. 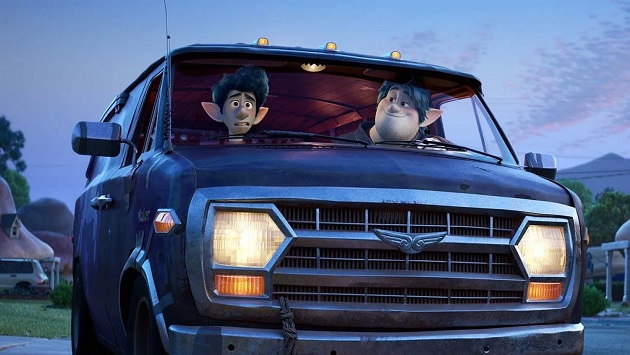 Within the movie are all the elements of a classic. But when they come together, they can’t help but feel hollow and forced. For example, there’s a sideplot involving an old dragonslayer named Manticore (Octavia Spencer) who joins the mom in following the boys as they wade further into danger, that has just about the most unrewarding payoff I’ve ever seen from Pixar. When the boys first meet this character, she is a repressed and almost robotic shell of her former self. When they reignite her passion for adventure, she goes nuclear, which, to any person who has ever watched a movie in their lives, essentially telegraphs that she’s going to be, if not the villain, a serious adversary. Without spoiling too much, nothing like that happens at all, and instead she’s just an action hero who shows up at the right time somehow. Really? That’s it?

Sadly, this isn’t just a fluke. On that very adventure, the women have a run-in with a biker gang that served as a kind of highway nuisance for the boys earlier in the movie. There is no meaning to their encounter whatsoever. It was so empty, I was honestly wondering why the gang even came back in the first place after fulfilling what looked like a theme of magic being restored and re-awakened in the modern world due to the boys and the purity of their quest to have one final moment with their father. For a movie called “Onward,” which is named after the “drive” gear setting for Barley’s van, all I see is reversals that rob and cheapen the experience.

Speaking of reversals, Onward seems conflicted as to who its main character actually is. For most of the film, Ian is at the center and the perspective belongs to him as he learns and has to overcome his fears. Then that changes for a reason that is as trite as it is borderline contemptuous. If the entire point of his character arc is that he doesn’t actually need magic to self determinate and be like his father, surely at least some part of that arc would involve understanding that his brother Barley is, at least on some level, the burnout and loser Ian secretly knows he is. The movie is telegraphing this again and again and again, only to then seemingly say… actually just kidding, he was basically the real father. Look, I love video games too, and I have plenty of sympathy for the people who play them just a little too obsessively for their own good. But this is not how you convey affection with credulity.

It’s almost like if, in Back to the Future, Doc took over for Marty as the main character. Or, more recently, if, in Ready Player One, Wade let i-R0k win the contest. Okay, that’s nerdy enough. Bottom line, Onward is sub-par Pixar, and Director Dan Scanlon has done better.