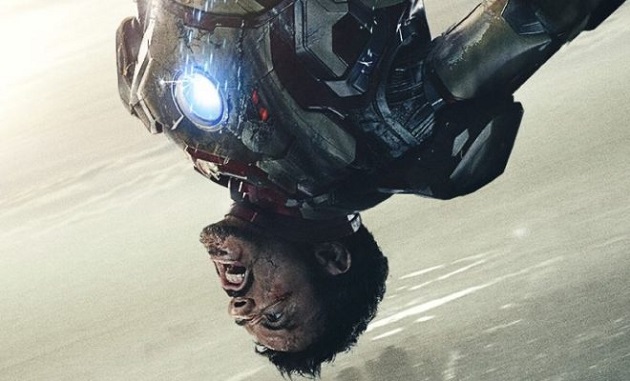 AUTHOR’S NOTE: This article was originally published on the Cinematic Katzenjammer in June, 2016.

Iron Man Three is my favorite film in the Marvel Cinematic Universe. Yes – that one.

It’s the rare threequel that’s better than both predecessors on merit, action, character, and closure all in one. It’s one of the best in the entire Marvel canon and one of the all-time character profiles of the genre. In this piece, I will explain why, and you can consider it the definitive analysis on the Internet.

The problem is that it’s not a great franchise movie. It has little to offer the total continuity. At the end of this film, Stark proclaims himself “a changed man.” In Avengers: Age of Ultron, he changes right back. The trinkets and toys also didn’t remain relevant. Iron Patriot was just the all-American color phase of War Machine. Extremis is never seen or tried again, and he obviously rebuilt at least a few of his suits after blowing them up.

An unwieldy film; it released in summer 2013 but takes place at Christmas just a few months after the Battle of New York. It’s a strange-looking, oddly-placed canon entry that presents as a conclusion yet not a farewell to the founding character of the Cinematic Universe who plays a key role in four major subsequent events. It’s got a lore-breaking twist in the middle of its plot that radically reshapes a popular traditional villain (and you may have thought the film was making fun of you for being invested in the tradition), and a cluttered final battle that we’ll talk about later.

As its individual flaws, it bounces so fast all the time that it’s not always easy to keep track of what the plot hangs on in a given moment. The White House politics isn’t detailed enough to give full context. It could afford to dial back a few of the jokes (though Marvel has since taken this problem and put it on steroids – see Thor: Ragnarok). And it fails to dispose of Maya Hansen in a way that feels like her death actually mattered.*

So there: a critique. But here’s where it gets interesting. At worst, these issues muddle the mechanics of the plot. They do not, however, interfere with the story. That difference is important, and if you raged against Iron Man Three, there’s a good chance you missed it.

Before you read further, take the time to revisit this film entirely on its own. Forget about all that came later. Forget Ultron, the Civil War, his Spider-Man bond, his daughter, Thanos, his death, etc. Observe the full picture and the narrative seams in motion with fresh eyes, and track the patterns of character behavior.

Okay, if you didn’t do that, here’s the ending.

Three statements are made by the ending:

The very first scene taking place in the present day features Stark masochistically injecting himself bloody with his latest suit like a drug. He has all the overt symptoms of an addict – restless, manic, and deluded into a feeling of self empowerment no matter how painful.

This is apparently the 42nd one of these in just a few months, which means he has repeated this self destruction too often for his own good and at the expense of a good night’s sleep. In doing so he has become a recluse – isolated during a season that is all about togetherness and family. This is latter-year Howard Hughes. Stark transgresses himself in a cycle of obsession with modeling and tinkering these tin men. And at this point that’s really what they are because they can now automate themselves without him. Nevertheless he can’t stop making them. His demons externalized here; each is a metallic iteration of himself that he can “fix” and cling to like a crutch.

It’s understandable why he’s doing this. “New York” and the events of The Avengers did a number on him. It’s one thing to fret over terrorists and copycats. Wormholes and aliens are another level. Of course his ego can’t handle that the universe is so much bigger that he ever prepared for. He is anxious and stressed because he feels stretched thin by it. And the Iron Man suit itself has now become, as Shane Black described it, an “interloper in his relationship.” How long would your girlfriend stick around if a robotic errand boy was constantly in the middle even to the point of attacking you in your bed?

The central character conflict is between what he wants and what he needs. What he wants is absolute security. What he needs is to heal. And if the moral of Iron Man Three could be summed up in a sentence, it’s that a Tony Stark with fewer suit options is far preferable to a Tony Stark living a sleepless, tortured, and lonely existence.

And that’s why we have the villain.

Yes, the villain and bad guy scheme in this film is the thing that works the least. But it’s the relationship that matters here.

A flashy classical villain with superpowers he needs the right metallic alchemy to counter was I’m sure what some of you were hoping for. But after everything already discussed above, it should be clear by now that it would not fit the ethos of this film. It would miss the point entirely.

After an alien invasion and Norse gods in New York, the world has never been more ready to believe in an absolute villain. And Stark is all too eager to throw himself at it with reckless abandon. So it’s a stroke of genius that this time the entire thing is a ruse – an elaborate TV stunt with movie magic. And their plot is just to continue it and make Pepper their trophy.

It’s been observed that previous villains have reflected darker shades of Tony and Howard Stark’s business and lifestyles. Aldrich Killian began as a reflection of who Stark would be if he was just another awkward brainiac, and then became a “better” version of who Stark was before the cave. His source of superpower – “Extremis” – attempts to upgrade the human brain and repair the body to effectively make someone invincible. This is exactly what Stark himself has been chasing his tail in pursuit of.

But as we learned in the beginning, Extremis began as something potentially wonderful – a restorative, regenerative power. Killian is bastardizing the purity of that creation. Sound familiar? Can you think of anyone else in this movie who is also doing something like that? 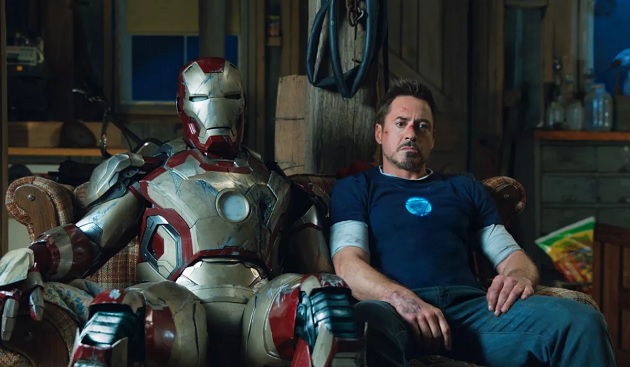 If the metaphor about how “that which saves him is also killing him” was lightly suggested by literalization in Iron Man 2, it was disposed of there through comic cliché. The third movie actually advanced it by taking to a logical extreme what had previously empowered Iron Man. Maybe it was “too” logical in doing all that. But it was all there, on the surface and then right underneath it. Strip away the laughs and thrills, and you find that every beat of story and action is all in the service of these themes. Style and substance are one and they define the character.

At the beginning of Iron Man Three, the suit is giving Pepper a cold, mumbling back rub while Stark is in a different room like Dr. Manhattan. At the end, Stark is personally placing a necklace on her. Before he was “with” her, but now he is truly with her. Early on he coldly brushes off a kid’s plight of paternal abandonment. At the end he gives that kid an incredible Christmas present. This is what the film was about. This is what the film is.

What it also is: a kickass action epic.

Action is character – a gauntlet of humane trials for Stark that makes these themes visceral, not just spoken. It’s a half MacGyver/half Jackie Chan type of script where the suit is either absent or insufficient. It consists of Stark on his feet, forced from the comforts of the suits, interacting with his environment and the tools around him. The suit at home is a prototype he has to manually rewire for it to shoot. In Tennessee he’s handcuffed and unarmed against two fire-proof super soldiers with guns. He has to fashion explosives out of household objects and use their Extremis powers against them. In Miami he infiltrates a compound with electrified oven gloves and flashbang Christmas ornaments. Then he fights his way out with only a metal arm and leg. In the final battle, he’s ordering his tin soldiers around and piloting them interchangeably. Otherwise they’re in the background led by JARVIS.

And let’s not forget that incredible mid-air rescue.

Notice that the suit is a physical limitation. It will not save them all for him. He has to overcome it by engineering the barrel of monkeys.

The oil rig fight demonstrates his grown detachment to the suits. He uses them as elevators and catchers, and he jumps out of them as fast as he jumps into them. Then he “kills” Killian by trapping him in his favorite suit and blowing it up.

Don’t confuse all of this as just creative flavors of spectacle. The style and substance go hand in hand here. The suits help but they do not control. They are tools that extend the greatness of the man who created them. They reveal the genius underneath for his real power. Iron Man is Tony Stark as an inventor, a troubleshooter; “The Mechanic.” His power is his mind and his resourcefulness, now free from the tin skins that had previously constrained him.

So we have an ending that redefines his heroism as he chucks his arc reactor into the ocean and then picks up a screwdriver. “You can take away my house; all my tricks and toys. One thing you can’t take away: I am Iron Man.”

Maybe you knew that about him already. But it was wonderful to see him learn that lesson.

I began by talking about the ending, and I close by returning there. The struggles of the universe pale in comparison to the struggles of the human mind. The “clean slate” isn’t to say goodbye to him or to pretend like he’ll never again be Iron Man as we know it. It’s the Christmas redemption. It is the embrace of family without armor, which is why he hugs Pepper as she watches the fireworks. It is the homecoming – an act of coming home and actually treating it like a home rather than an iron fortress. And the shrapnel removal open heart surgery is exactly that – opening his heart and learning to be a person again. A partner. A friend. Perhaps even a father.

There are few movies of this genre that convey that ethos so beautifully in every fiber of their being. There are few movies of this genre that labor so hard to reconstruct their hero and affectionately build him to his best self. And by the end of the film, I felt like I’d grown with him. I felt like I’d just experienced the warmth of Christmas on a hot summer’s day. What a strange thing to say about a blockbuster film, but that’s what it means to be a favorite.

Tony Stark causes so many problems and has been an antagonist to so many others that it’s amazing we continue to root for him. Iron Man Three showed us why. He earned it.

*In the original script, she’s the main villain. Marvel changed that (boys with toys), which is why we have Guy Pearce. But a flaw is a flaw.