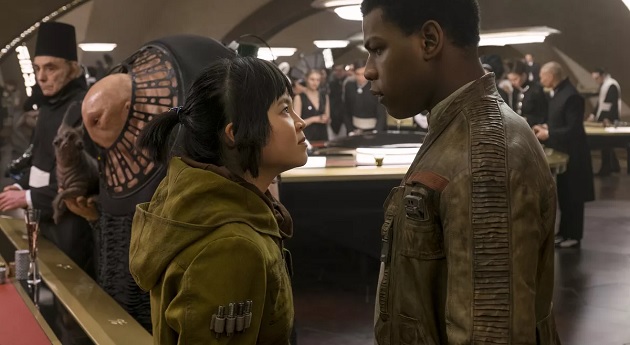 AUTHOR’S NOTE: This article was originally published on the Cinematic Katzenjammer in December, 2018.

Sometimes obsessing over the issue of time will destroy your movie faster than time being a plot hole. Star Wars: The Last Jedi has this problem.

Movies do funny things to our brains, specifically with our conception of time. One of the more literal characteristics of Inception as an allegory about cinema is the fact that time slows proportionate to reality. Through that relativity, movies that run a few hours can feel like an epic adventure.

The trick is – you’re not usually thinking about movie time. You’re either just feeling it, or you’re at one with how the story is propelling forward.

But sometimes a movie makes you think about time in a way that makes it a constant or part of its feeling. Have you ever held your breath while a character is underwater? I do that even when I hate the movie. Some forsake character arcs entirely just to be a thriller about solving X problem in time. Other movies will use the simple fact that time has passed as evidence of a character having grown.

Star Wars: The Empire Strikes Back is a perfect movie. Not literally, of course. But it’s telling that of all the millions of ways the movie has been dissected, the only “problem” turned out to be a time discrepancy. Luke conditions himself in the Force on Dagobah over seemingly several months, intercut with Han & Leia in a cat/mouse chase with Darth Vader that couldn’t have been more than a week, and then they all end up on Cloud City at the same time.

This was not actually a problem. You never felt the squeeze of Han and Leia’s emergency on Luke’s present predicaments on Dagobah, except when Luke dreamt it. And the movie wasn’t bearing you down with logistics of how time actually works. It just does.

A fair amount of Empire’s plot framework is present in The Last Jedi, a movie likely made with some cognizance of that previous discrepancy. Rey does most of Luke’s Dagobah beats on Ahch-To under his tutelage before leaving with her training unfinished, while the remains of the Resistance is on the run from the entire First Order in a corner of space scrambling to escape.

There’s just one key difference. The Last Jedi puts time at the forefront of the conflict. The audience is constantly aware of it.

The Resistance is right where the First Order wants it, sluggishly crawling through space just far enough ahead for the laser barrage to be minimal, but running on fumes. The conflict between Admiral Holdo and Poe Dameron is defined by what each character wants to do when the clock runs out. And it will run out in six hours. So the Canto Bight mission is framed as “you’ve got six hours to get there, recruit a scoundrel, and get back here in time to solve our problem.” Six hours.

Not only that, but the opening text crawl (along with his dismissive remarks about staring down the First Order) strongly implies that what the Resistance is truly waiting for is Luke’s return, as though they’re hoping he’s got a secret weapon. Rey’s arc is defined not just through her relationship with Luke, but also her relationship with Kylo Ren, with whom she is regularly speaking in real time. Real time in his case being while he’s actively pursuing the Resistance in that six-hour period. He and Rey even touch hands through the Force, which has the consequence of revealing her exact location – again in real time.

As a result, the three divergent stories aren’t just intercut, but interacting. And they all land in that six-hour pressure cooker.

Again, not literally. I’m not arguing for interpreting the film as taking place over just a couple days. This is a pacing-propulsion problem in terms of how we the audience actually feel when watching it. It makes the Canto Bight journey feel too long (it’s only 15-20 minutes!) while Rey’s journey feels shortchanged, despite getting a lot of time for herself. If the movie keeps giving you reasons while you’re watching to think that she hasn’t actually been on Ahch-To very long, believing in her becomes that much more difficult.

It’s only later afterwards when you realize that time actually isn’t much of an issue at all in terms of where characters are and what they’re doing. But that doesn’t change the way most of the movie’s midsections feel in their moments. And you, like the subject subconscious in a dream, disturbed by the feeling that something was off, probably checked your watch at least once. “Couple hours left, morons… get moving.”

The Last Jedi wanted as much immediacy and urgency as it could get to realize its admirable ambitions. But by setting its plot to a ticking clock for over half its runtime, it gave much of its own game away. Time became a problem that directly affected our own ability to actually experience moments of emphasis and intrigue the way the characters supposedly do.