I’m not going to spoil anything major in Thor: The Dark World in this. But if you literally don’t want to know anything, stop reading now and go see the movie (and the credits teases…both of them).

Here’s what you saw.

Sif and Volstagg took the Aether (the mcguffin from the movie) and gave it to the Collector (played in a cameo by Benicio del Toro), entrusting him to guard it safely and remarking that with the Tesseract already on Asgard, it would be dangerous to have two infinity stones so close together. The Collector creepily agrees to do so and the two Asgardians leave. And once they’re gone, he says: “One down…five to go.”

If it wasn’t already apparent, The Collector is not their friend. Not a completely straightforward bad guy – more of an anti-hero with the powers of meditative precognition and cosmic manipulation. the reason they trust him is because he’s been around for a while and hasn’t done anything bad to them yet. He has a vast understanding and comprehension of advanced science, which allows him to basically do the magics that he can do – including amplifying his own energy in physical form to make him bigger and stronger. He made a hobby out of collecting and safeguarding artifacts just for the sake of doing it after his wife killed herself. It’s his way of maintaining his own sanity, and he also sees it as his own way of doing good, for some of the things he “collects” are too dangerous in the hands of others. He maintains a massive museum of artifacts, art, weapons, former species, and even people.

You may have noticed that he looks like he came straight out of an old Joel Schumacher movie. James Gunn – director of Guardians of the Galaxy – described The Collector as an outer-space Liberace. Benicio probably took a couple acting cues from Javier Bardem’s Raoul Silva in Skyfall.

Can you tell me more about The Collector?

The Collector is a member of the Elders, a group of individuals left over from an old extinct race of people with the power of immortality. They are immortal due to a bet they purposefully lost with Death herself (in the Marvel Universe, Death is a woman – the same woman Thanos is in love with), making them permanently banned from Death’s realm. Their superpowers come from primordial energies from leftover radiation in the Big Bang, which makes them nigh invincible.

We used to think of Thor and Odin as gods, but the fact is, they’re just beings that are slightly more supreme than humans. The real gods are the Elders, but they aren’t so much “gods” as they are beings with almost the highest power. And what do the Elders do? Pretty much the same thing people in retirement homes do. They think, contemplate, play games, and amuse themselves while they still have time to do it. The only difference is that the Elders don’t run out of time, so they have to get creative with their amusement sometimes, which occasionally spills over to our world. The Avengers often end up being used as pawns in their games.

What are the Infinity Stones?

In Marvel Comics, there are six infinity stones, but they’re gems. Together they power the Infinity Gauntlet. Here’s what they are in the comics.

Green = Soul (The power to capture, control, and manipulate souls, alive or dead)
Orange = Time (The power to travel through time, trap enemies in time, closing or opening time loops, and can make others younger or older)
Purple = Space (The power to move yourself, anyone, and anything through space and the power to rearrange it)
Blue = Mind (The power to enhance your psionic power and access the dreams and thoughts of other people)
Yellow = Reality (The power of wish fulfillment…literally)
Red = Power (The power to access any power or any kind of energy anywhere. It can boost the effects of all the other gems and can make a sole being utterly omnipotent.)

If you ever played the Diablo games, you’re aware of using gems to make an item more powerful. The Infinity Gauntlet is a glove owned by Odin that, if combined with all the gems, can give you the power to actually BE a god, because you can do anything with unlimited power.

Instead, for the films, the Tesseract IS an infinity stone, as is the Aether. If no gem is to be used (probably for the best – there are only so many mcguffins you can ask general audiences to keep track of) then there are four more random objects of power reserved for future movies. There’s a good chance that at least one more of them will appear in Guardians of the Galaxy, but we have all of Phase II AND Phase III to get there, and that was a great way to go. Getting creative with them would allow for even more ridiculous combinations to be made out of the powers, and that will only make for movies that are more fun.

The problem is that there isn’t quite as tangible a difference between the Tesseract and the Aether, at least not in terms of the mythological differences that each infinity stone conveys. They obviously do different things, but they don’t really represent different types of powers. So it’ll be interesting to see how it translates to the Infinity Gauntlet. You can’t really have the stones without that, so maybe Thanos will just take each gem and infuse it with the power of the new infinity stones so he can power the glove.

So what does this say about Guardians of the Galaxy and the Marvel Cinematic Universe?

Guardians of the Galaxy was seemingly an odd duck for Marvel, so there was no chance they could have not had some kind of connection to them at the end of Thor: The Dark World, especially when that movie really opened up the galactic scope for the franchise. 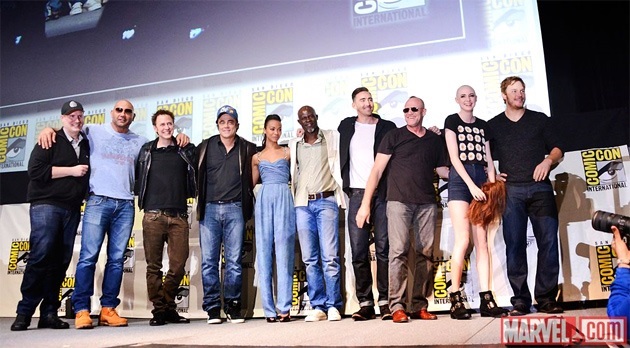 It’s interesting that we get to see The Collector first because he’s not the main bad guy of the film. Ronan the Accuser is, along with Nebula, Korath, and Gamora (she’s the Karai to Thanos’ Shredder – so I’m assuming she’s a baddie for now). Given that all five of them are connected to Thanos, it’s probably impossible to have him not either be in the movie (even as a cameo) or be referenced in it.

Furthermore, it tells us that for now, Guardians of the Galaxy will probably be keeping to itself for just a bit. I would not expect them to appear in Avengers: Age of Ultron. What that also means is that Captain America: The Winter Soldier will be the movie that does the most to build up to that particular story, just as Thor and Iron Man 2 did for the first one, since Iron Man 3 didn’t really do much for overall continuity. It was more about Tony Stark dealing with himself and his own little corner of existence following the events of The Avengers. That makes sense, and it falls in line with my theory that S.H.I.E.L.D. will ultimately be responsible for creating Ultron as a side-effect of Phase 2 (making weapons with alien technology). I initially thought it’d be JARVIS given more agency as an AI going rogue and manipulating Iron Man’s armor to create himself, but the introduction of James Spader as the voice of Ultron pretty much kicked that one in the teeth.

It’s possible we might even see something along those lines in Agents of S.H.I.E.L.D. but ultimately you can expect to see at least an Easter Egg (possibly even a trailer) at the end of The Winter Soldier for Age of Ultron. The REAL crossover tie-in will be Avengers III, which will probably finally feature Thanos as the villain. That also means we’ll have the Avengers and the Guardians team up to fight him. If Joss Whedon is still getting what he wants (and he probably is), my guess is that Avengers: Age of Ultron will be the darker and more personal installment of its own series. Perhaps it’ll be an Avengers Disassembled kind of movie where the whole team will fall to pieces, only to come together again for the big everything-or-nothing battle.

So maybe it’s still possible that my dream will come true and Hulk will get tossed into space. Whatever happens, we’ll all find out soon enough.